Sarah P’s comments: I thought sailing to Greenland was Kent’s greatest adventure and then I discovered that six years earlier, he’d sailed to an even more remote place: Tierra del Fuego. No matter what edition you can find, this book is worth reading, however the Internet Archive has made a scanned copy of the original available which is the best way to view Kent’s woodcuts.

Only the voyager perceives the poignant loveliness of life, for he alone has tasted of its contrasts. He has experienced the immense and wild expansion of the spirit outward bound, and the contracted heartburn of the homecoming. He has explored the two infinities – the external universe – and himself.

All things look good from far away and it is man’s eternally persistent childlike faith in the reality of that illusion that has made him the triumphant restless being he is.

In quietness the soul expands.
(This quote is from ‘Wilderness, A Journal of Quiet Adventure in Alaska‘, another of Kent’s books but I like it so much I had to include it. )

Sarah P’s comments:  Yesterday, I discussed my favorite book by acclaimed circumnavigators Irving & Exy Johnson.  Today, I want to talk about their movies. An interesting aspect of their unique lives was that Irving documented a lot of it using a movie camera.

One of the best sailing movies ever made (in my opinion) is The Peking Battles Cape Horn which has made it onto YouTube! This movie chronicles Irving’s stormy rounding of the Horn aboard the German windjammer in 1929 and is both a historical record of sailing and documentary filmmaking. 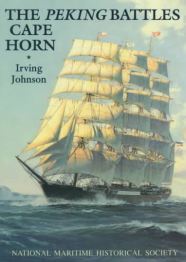 Johnson also kept a journal of his experience which was the basis for the book of the same name, originally published in 1929 and re-issued by the Mystic Seaport Museum (1997).

Irving & Exy went on to make many more movies some of which became National Geographic specials. All of their material is now housed at the Mystic Seaport Museum in

Mystic, CT.  They sell a narrated compilation of the Johnson’s movies: Unfurling the World . It is well-worth the $29.95 price tag as it not only contains great sailing shots but is a visual record of sailing in what is now a by-gone era.

‘Look at this, the open ocean! The forces involved are fantastic! There’s no words that I can use in any language that will tell you what it’s like. If you’ve been there it’s the only way you’ll know because the forces are beyond anything you’ve ever experienced or thought was possible.’